I don’t normally travel within the UK, but last weekend I went to visit a friend who recently moved to Cumbria. 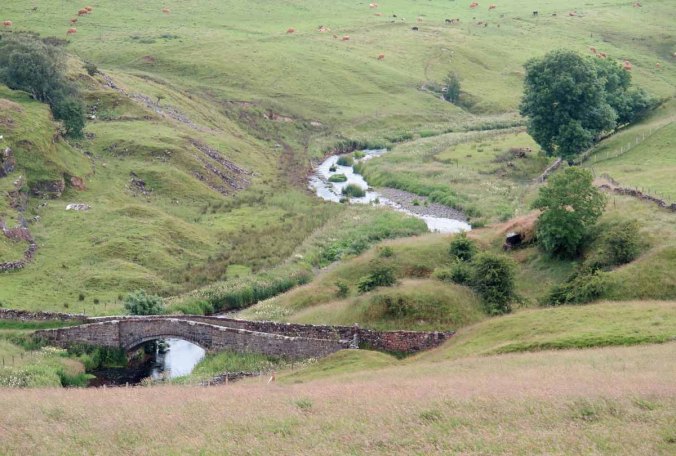 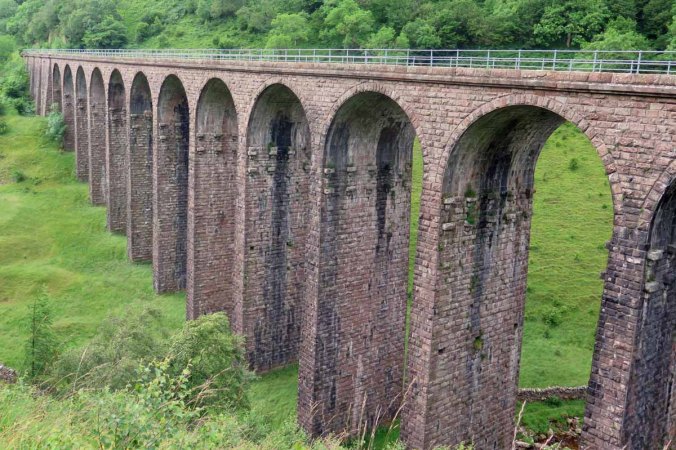 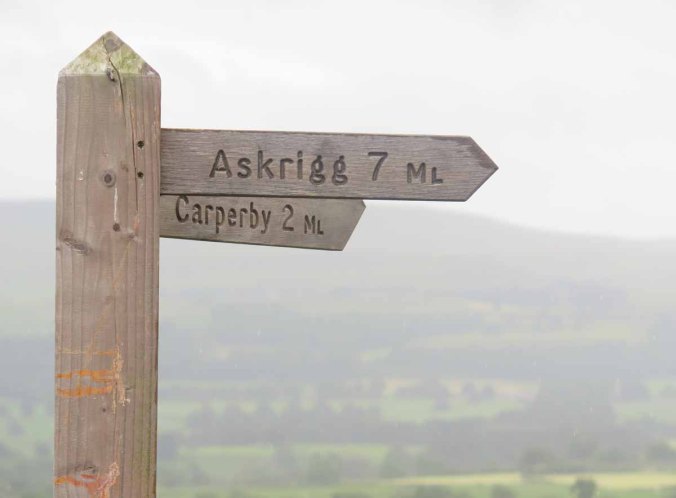 We visited Bolton Castle, which is really nice and has great views over the countryside.

There are many nice villages nearby, so we spent a couple of hours window shopping and sampling Wensleydale cheese in Hawes. 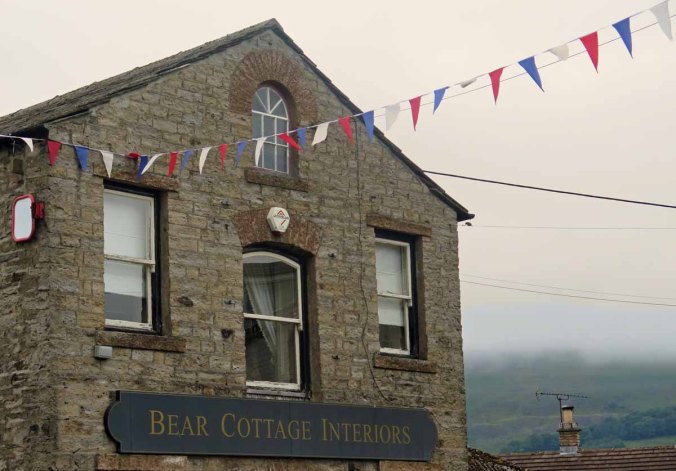 My friend runs the beautiful Brownber Hall, so we had plenty of time to relax in style, watching goldfinches flying by. 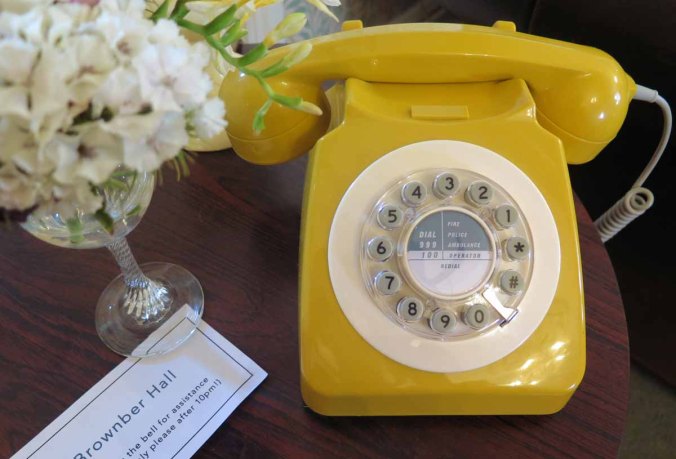 We arrived for our week in Paris on 21 June, when the French celebrate the Fete de la Musique. Getting off the Eurostar and straight into the heart of the party in the Marais was a great start for our holiday! 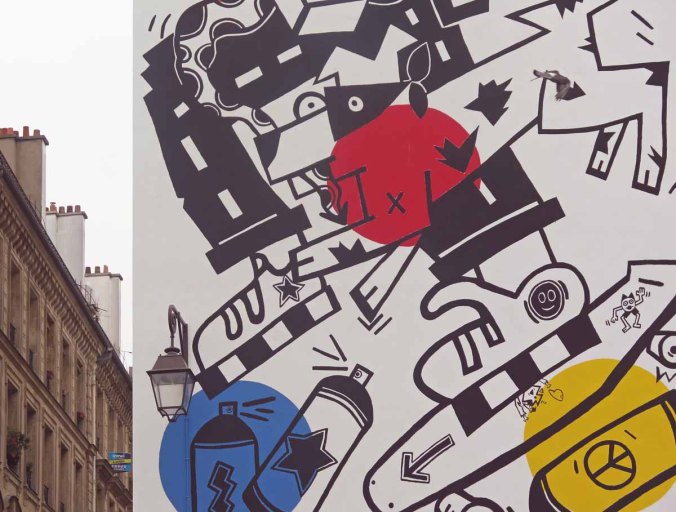 I’ve been to Paris lots of times, so I don’t spend much of my time in the top tourist attractions, but this time we decided to go up the Eiffel Tower. There was extra security because of the Euros, but otherwise it was relatively quiet.

As ever, the views from the top are truly amazing (you can even buy a glass of champagne from the bar on the 3rd floor), so we spent a good amount of time admiring the views and taking photos (tickets to the summit for 17€, you can book online but advance tickets tend to sell out quickly). 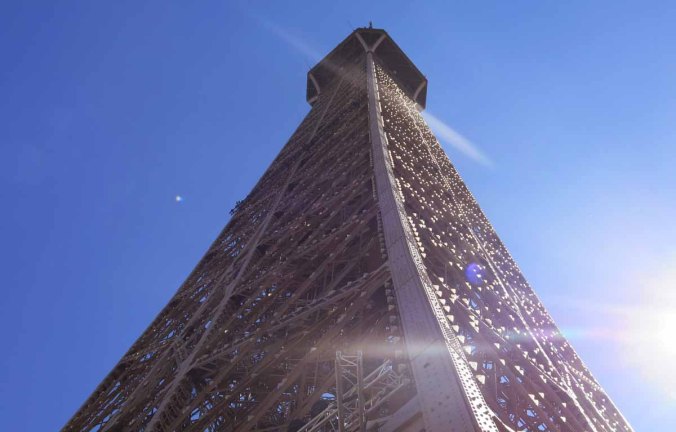 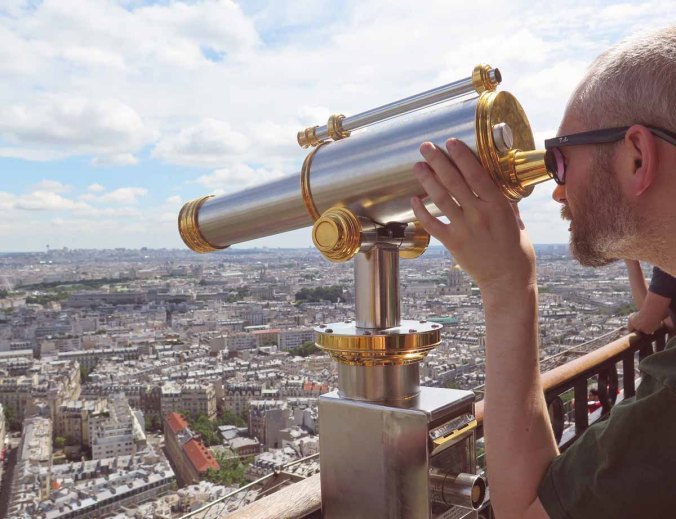 We spent an afternoon walking from the Arc du Triomphe to the Louvre via the Champs Elysees. This is a massive highlight of Paris, but it’s definitely one of the most beautiful thoroughfares in the world. So much history, sights and amazing architecture all in the same place! This is definitely where Paris is at its most grandiose, and I’m happy every time I go back there. 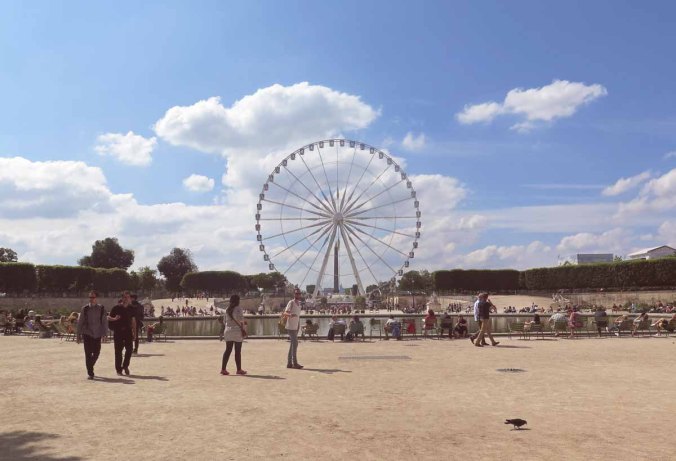 Close to the Notre Dame but significantly less crowded, the Sainte Chapelle is a gothic church with the most amazing stained glass windows (tickets for 10€). We spend some time admiring all the little details and taking photos which don’t really do the place any justice.

We then walked to nearby Ile St Louis, a small island in the Seine full of nice cafes and shops. 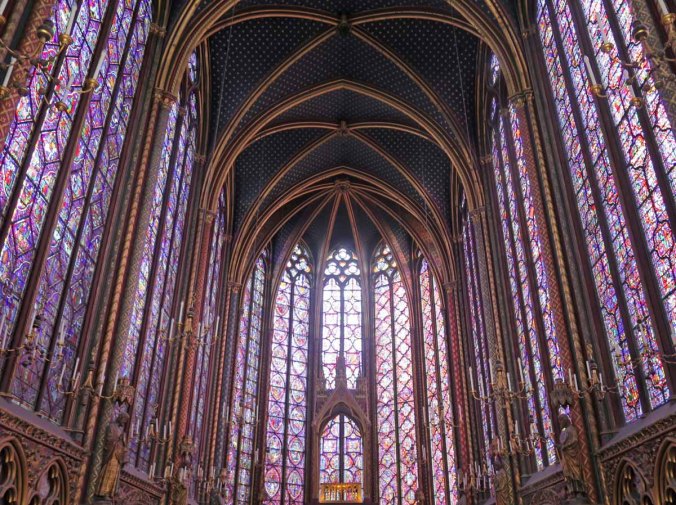 I went to Parc de Sceaux once 21 years ago! I have been to Paris many many times since, but I hadn’t been back to this beautiful park yet, so I thought it would be a good thing to go back and take a nice picnic.

This is a beautiful park with a castle and formal gardens, and it’s easily accessible from Paris (just take RER B to Parc de Sceaux). It was very hot when we visited, so it was a great day to lounge under trees and watch parakeets flying over. 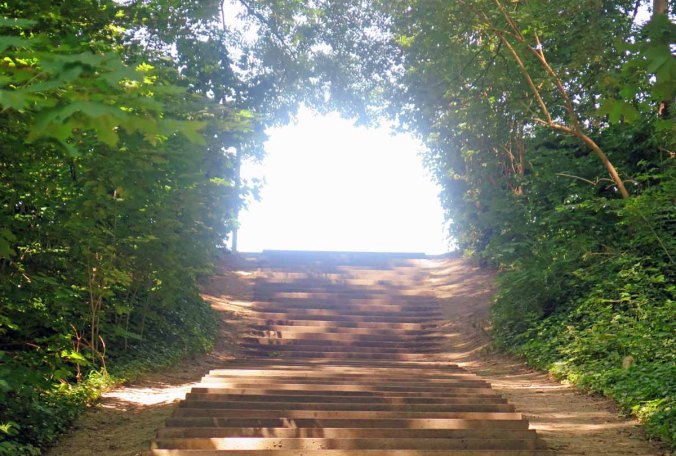 Visiting Tour Saint Jacques was a massive highlight of this trip. You get amazing views over Paris in a very exclusive setting.

The guided visit (tickets for 10€) takes 50 minutes, half of which consist of looking over Paris in all its glory. The maximum group size is 17 people, so it’s a real privilege to be able to visit. 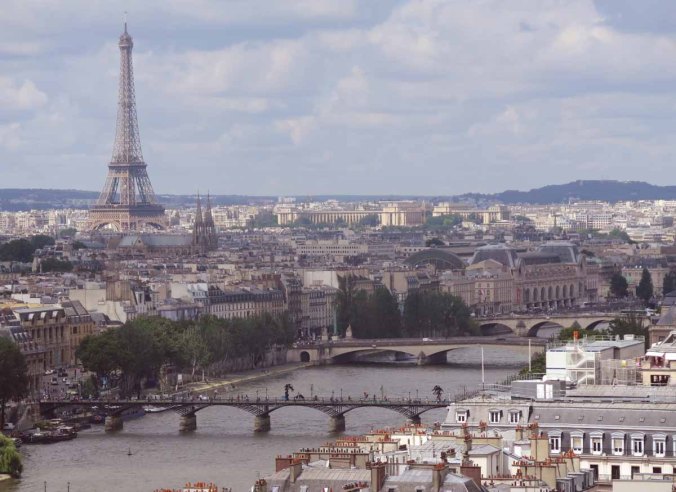 Like the High Line in New York, the Promenade Plantee is a suspended footpath which has been transformed into a park. It’s a beautiful and peaceful place, and a great way of seeing Paris in a different way, starting behind the Bastille. 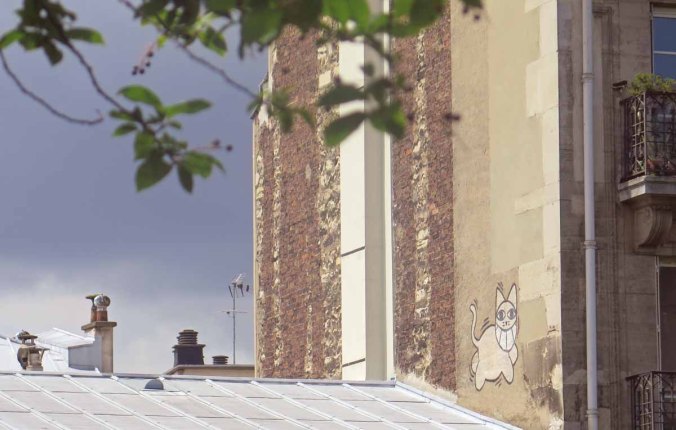 I’ve been meaning to check out this new museum for a while, so I made sure to book tickets in advance this time around (14€) – although we probably needn’t have.

The Louis Vuitton Foundation is a modern art museum in the outskirts of Paris, right next to the Bois de Boulogne. The building by architect Frank Gehry is as much part of the display as it is part of the outside environment, and you get great views of Paris from there too. 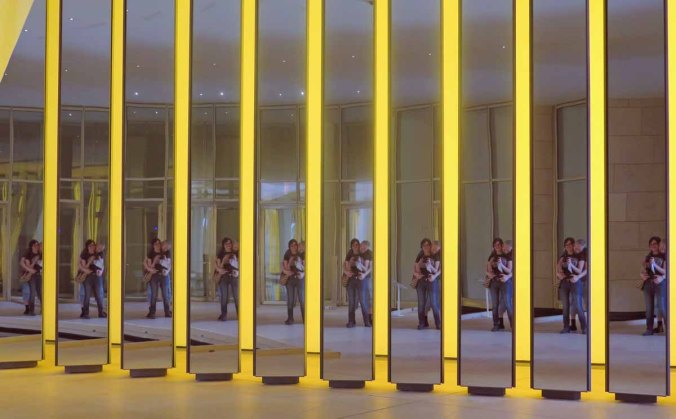 We went to the Euros in Ukraine four years ago, and it was great. This time we had tickets for two games – Austria v. Iceland, and Italy v. Spain, at Stade de France. Both games were great, and as is usual in such tournaments, the crowd came from all over the world.

We also went to the Fanzone which was right next to the Eiffel Tower – an amazing view that really added to the atmosphere.

From my experience with international tournaments (I also went to the World Cup two year ago), this was a bit different: because Paris is already such an amazing place, the football wasn’t such a central part of our trip – on the other hand, we had all of Paris to explore, which is always great.

The other consideration is that because of the terrorist attacks from November, there was a lot of security everywhere – you had to go through three security checks to get into the stadium or the Fanzone – but of course this was more than justified, and everything went really smoothly. 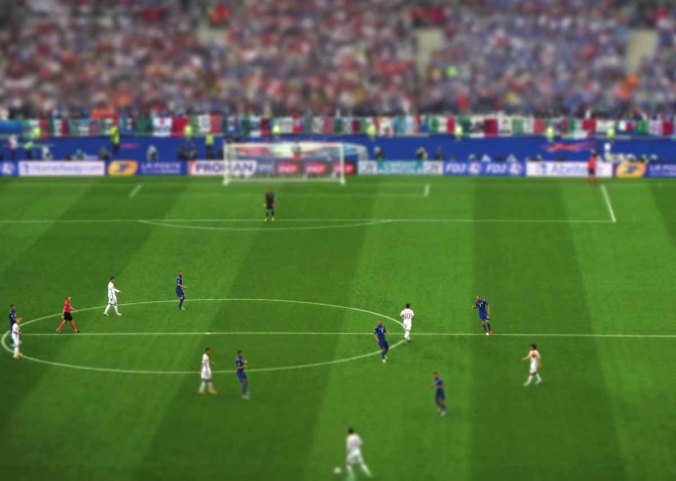 Go: The best way to get to Paris is by train. The Eurostar takes you to Paris in 2h30 and it’s just so convenient! You can leave after work and arrive just in time for dinner in Paris.

When to go: Paris is always amazing, but summers are great as the days are really long and you get to enjoy lots of outdoor activities. We were really lucky this time as it wasn’t as crowded as peak season usually gets.

Stay: We stayed in this perfect place in the Marais. It was a perfect home for one week – located right at the heart of the action in a bohemian neighbourhood, but in a nice and quiet area. Marais is a great place to stay, as you are centrally located while feeling that you’re living like a local. 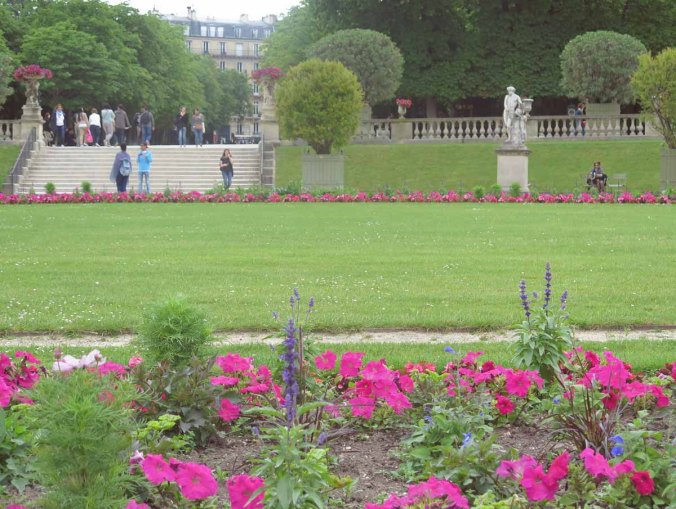 Food: We ate mostly at the flat where we stayed, but we also went to a couple nice restaurants. Le Potager du Marais is a popular vegan place which serves yummy food, including the best vegan cheese I’ve tried (lunch for two for 35€). Our favourite food place this time was Hank, a vegan burger place that had the best food (a meal deal with burger, side and beer for 13€) and it was very cheap for Paris prices. 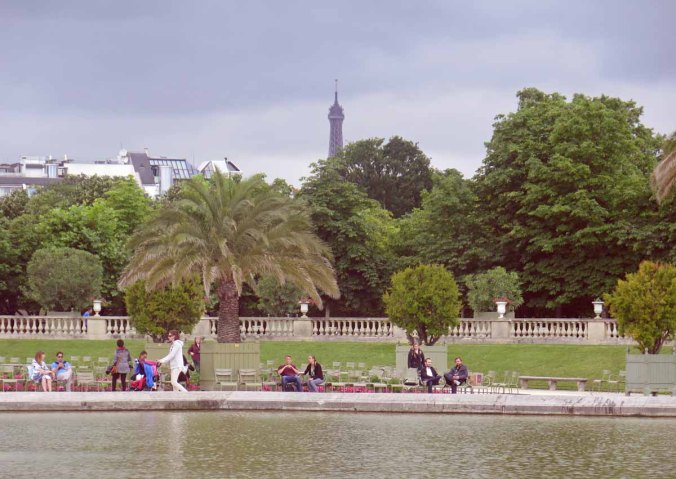 Drink: France is obviously great for wine, so I made the most of the 5€ bottles at the local supermarket. Drinks at bars and restaurants are not as cheap, although wine is fairly priced (about 5€ for a glass). Beer lovers end up paying more, with a pint costing 7-8€ at bars. We also ended up at a ridiculously touristy place at one point, because we were running late and wanted to watch a football match – we paid 30€ for two drinks (1l beer and a cocktail) which is exactly the kind of tourist trap that you should avoid. Lucky for us, this was a one-off.

Transportation: Other than walking, the metro and local trains are great in Paris. Because we were staying for one week, it made sense to get a weekly pass (26€, and you need to bring a passport photo with you). Another good alternative is the carnet with 10 tickets which can be used within central Paris (14.40€).