I can’t really say I’ve been to Cluj properly. Our train from Sighisoara arrived after 11pm, and we had another early train to catch the next day. Cluj is the capital of Transylvania, but it’s known more because of its bars than its history. When we got there, there were still many places open and full of people – it definitely looked like a good place for a night out.

In the morning we had just enough time to check out Piata Unirii and its impressive Basilica. Then it was time to say goodbye to Transylvania and on a train to Budapest! 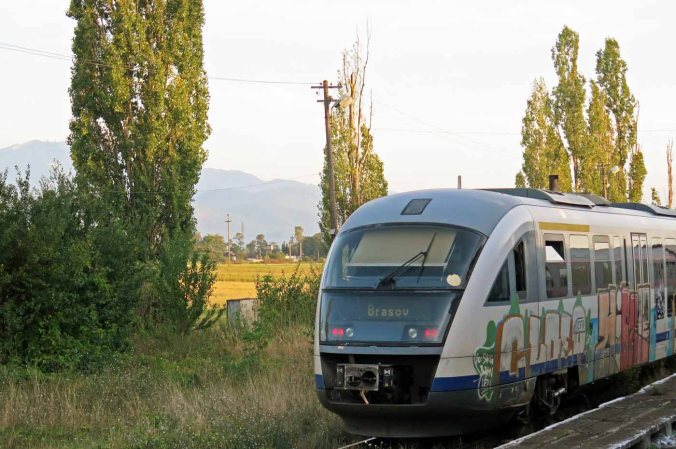 TRANSYLVANIA BY TRAIN: How to do it

Crossing Transylvania by train has been on my list for a long time. I managed to find lot of information online, but it was not as simple as I expected. Here’s what I learned:

There are many nice places across Transylvania. We arrived in Bucharest, then visited Brasov, Sibiu, Sighisoara and Cluj, which is a lot of ground to cover. Other popular destinations include Sinaia and Timisoara. A shorter itinerary can be done by visiting Brasov and surrounding areas only.

We booked accommodation in advance through TripAdvisor and Hostelworld. But places were definitely not full, so you can probably just book on the day. Accommodation is really cheap, we paid around £20-£30 for two people per night.

We went late in the summer. We got some lovely mild days and some really hot days, but overall it was a good time to go. The weather can be quite extreme both in the summer and in the winter.

You can book many tickets through the official Romanian rail website. Some tickets can be found on the website timetable but cannot be booked online. You can buy tickets at self-service machines on most stations, and those are fairly simple to use.

International train tickets cannot be booked online (you can find their timetable here). You can book those at booths marked ‘International’ at larger train stations.

Tickets were always really cheap – even the 8h journey from Cluj to Budapest cost just 150 lei (£25), and many local trains cost around £5-7. Although we tried to booked everything in advance, you can probably allow some flexibility and book them when you get to Romania.

Trains in Romania are what you’d expect in Eastern Europe: not particularly new, but overall fine. Stations in smaller places often don’t have clear signs, and trains can be quite different from each other: some have private compartments, whereas others just have open carriages.

Trains normally start their journeys on time, but sometimes there are delays along the way. Most trains were not very full when we travelled. Some trains have a restaurant carriage, but mostly we brought our own supplies of snacks with us. I read horrible stories about toilets on Romanian trains so I tried to avoid them, but apparently they’re actually okay to use.

We crossed the border from Romania to Hungary. The train stopped twice (once in each side of the border) and officials came in to check our passports. It was a simple process.

Romanian food is not particularly veggie-friendly, but pretty much all restaurants serve a good selection of salads. There are also lots of options from different cuisines, with plenty of Italian and Turkish restaurants.

What a little adventure this was! Unlike what I imagined, not many tourists cross Transylvania by train. But with some planning, it all went just as expected!

We travelled across beautiful countryside, forests and mountains, and stopped to visit some impressive villages along the way, learning more about the local history (and lots about Dracula!).

This was a unique trip, an unusual scape across a beautiful region.

One thought on “TRANSYLVANIA BY TRAIN: Our final stop in Cluj, and how you can do it yourself”